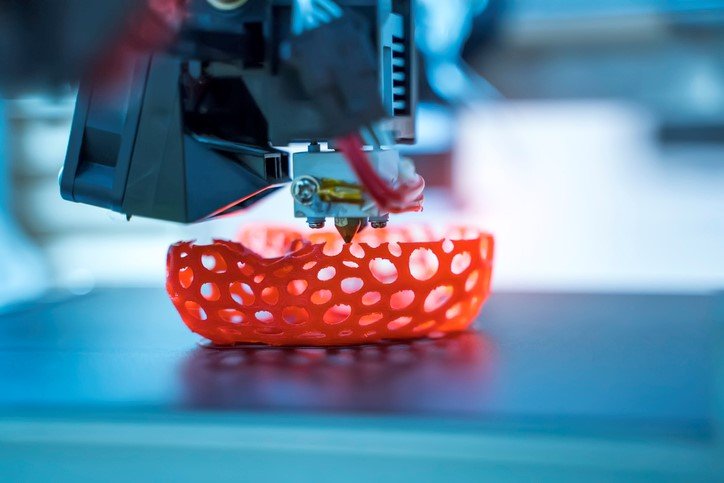 3D print capabilities are growing substantially, and soon, they will be a regular part of our ever-changing industry.

While relatively new to the market, 3D printing is here to stay. In 1984, Charles Hull developed the technology for printing physical 3D objects from digital data. As the industry advanced, so did the popularity and affordability of this technology. Today, 3D printing is taking business by storm: growth in this field is expected to expand by 31% each year (to a projected $21 billion market in 2020!).

Create What You Imagine

What is 3D printing?

A 3D printer is a manufacturing tool used to create three-dimensional objects that have been designed on a computer. Once an object is designed, it can be imported into software specific to the printer in use, which will slice the parts and send the printer a list of paths and directions to create the item. 3D printers have a wide range of shapes, sizes, and types, but all of them lay down (or “cure”) materials layer by layer, fusing them to create a three-dimensional object.

In today’s competitive business environment, marketing that brings individuality can certainly hit home. 3D print marketing campaigns are distinct, original, and a whole lot of fun. Here are three examples of companies that have gone the extra mile with 3D print:

A Hands OFF Process

3D printing allows designers to go straight from concepts to physical models while bringing ideas to life in a very short time.

3D printers employ a variety of materials, including plastics, polymers, steel, titanium, gold, and ceramic. This versatility means 3D printed models can be used for everything from artistic sculptures to personalized jewelry or even custom prosthetics and airplane components. Even 3D scans of individual people can be printed and modified to suit the end recipient.

As this technology progresses, entrepreneurs will find that their products may be as distinct as each client, and as wild as their ability to imagine. With 3D print, almost anything will be possible to dream, to draft, and to do!